From algae to bio-oil

A premier conglomorate in India is investing in an important and ambitious project to produce bio-oil from seawater microalgae.

One of India's largest private sector companies having interests in Oil & Gas, Refinery, and Petrochemicals and even in Retail has been researching algae-based technologies for some time and now will fund a small pilot plant - to capture carbon dioxide emissions and turn this into algae for use as biofuels and other products.

During their Phase 0 trials at Samalkot in South India, the company grew algae in about 100 m3 capacity ponds and bought  Alfa Laval Clara 20 Separators to harvest the algae. The algae biomass after drying was subjected to solvent extraction to recover valuable fats and lipids, which was then converted to bio-oil.

Based on the success of these Phase 0 trials, the company decided to implement their Phase 1 facility near their oil refinery complex located in western India, Gujarat. Alfa Laval India secured an important order for SP200 high speed separators for this Phase 1 project which is under execution and expected to start producing oil from seawater algae by end of 2014. These separators were selected because of the corrosion resistant Super Duplex stainless steel that is used in the bowl body and other highly stressed bowl components. This is required because of the chloride content of seawater.

The SP200L will concentrate the algae stream coming from membrane filters, which are used for the algae harvesting from 6% to 15%. The company has planned a huge volume of algae growing ponds using seawater and carbon dioxide gas coming from the oil refinery (one of the largest refineries in the world). Being located in a tropical climate, abundant sun light is also available, which is an important factor in growing algae. 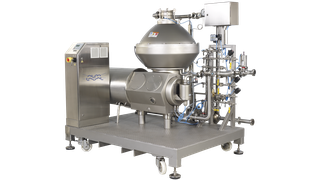